Introduction to the Forex market

What is Forex? What are rates of exchange?

Start your basic Forex education from learning about what global Forex currency market is and who are its main participants. This chapter will cover the following questions: why Forex is not market in a direct meaning of this word, what is the reason of its popularity, what features make Forex different from other financial markets and how to benefit from the rates of exchange.

Forex (Foreign Exchange or FX) is an international currency exchange. Have you ever changed your domestic currency into a foreign one? Let's remember how it works: we buy some foreign currency, which price is suppose to grow in the nearest future. Then, when the price goes up, we change domestic currency back, thus we earn the difference in exchange rates and make this trade according to the best exchange rate found. 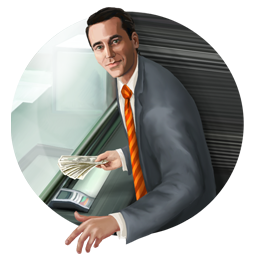 The Forex market works in the same way. Although we do not have to wait for months till market exchange rate moves up, today rates change in minutes. As for market access, we need only computer with Metatrader software and an access to the Internet. Download MetaTrader 4 right now to plunge into the process. 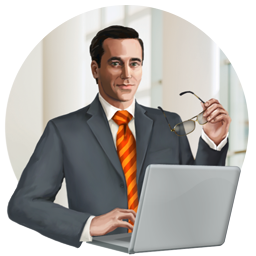 Forex is the financial market which was formed in the 1970s in the result of refusal from Bretton Woods system of fixed international currency rates. Rapid communications and computers development allowed banks to trade currencies "directly" in the electronic payment systems, without using special organizations - exchanges. Note:

In July 1944, in the town of Bretton Woods, New Hampshire, USA 44 States conceived the International Monetary Fund (IMF). This international organization oversees the balance of payments of its member countries and exchange rates of their currencies. Those agreements were aimed to establish the system of fixed exchange rates (Fixed exchange rate regime). This system was based on gold. One ounce of gold was equal to 35 U.S. dollars. Currencies of all other IMF member countries were tied to the dollar at a fixed rate. For example, the pound was worth $ 4.80, and the Japanese yen – 360 yen per $ 1.

Though IMF established a system of fixed exchange rates for member countries, still there was an opportunity to correct national currency rate in case of emergency. For example, price of the pound changed twice: in September 1947 it was $ 2.80 and in November 1967 it was $ 2.40. Despite the fact that system worked well in the 50s-60s it began to falter in early 70s and in 1971 was canceled. Since then, systems of floating exchange rates (flexible exchange rate) and regulated rates (regulated exchange rate) started to be in use. As a result, rate of each currency started to be determined by market conditions, but firstly and mainly by level of economic condition of the country. Some currencies rates had dropped down, but some of them had increased. For example, in 1944 the U.S. dollar was equal to 360 Japanese yen and in April 2005 – 107 Japanese yen. In this regard, money became a popular instrument of international investment, like stocks and bonds.

Thus, Forex is not a "market" in its traditional meaning. It does not have a certain center and a certain place to trade. All trading is conducted by global information networks that link different participants all over the world. 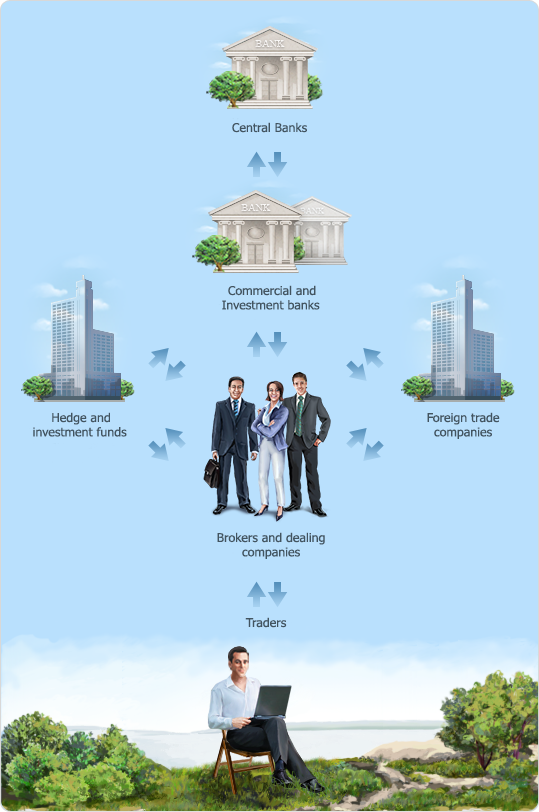 Now, when we know market structure, let's figure out, why this market has become so popular and attractive for both beginner and professional traders.

1. Forex is the largest financial market in the world. Its average daily turnover is more than 3 trillion U.S. dollars and continues to grow.

2. A full freedom of actions: at any time any seller or buyer can be found to conduct an transaction of any volume.

3. Currency market has the lowest cost, because traditionally it operates without fees, except the market difference between purchase and sale cost (as in any exchange office).

4. Forex is the most verifiable market, because if participants want to affect the market and reach their purposes, they must have considerable sums (tens of billions of dollars).

5. Today, it is very comfortable to work in the Forex market. Everyone can easily get basic knowledge, because comfortable environment has been created for learning process. Moreover, to join Forex you need only a computer with access to the Internet. Create your Forex account now.

6. Forex works around the clock all week, except weekends and holidays. Trading during a week does not stop even for a minute. Worlds financial centers open and close in Asia, Europe, USA and Australia successively. Traditionally there are 4 trading sessions: Asian, European, American and Pacific.

FreshForex is a brand operated by the international company Riston Capital Ltd. that is incorporated under registered number 20623 BC 2012, registered by the Financial Services Authority of Saint Vincent and the Grenadines.
The Company provides access to online trading for clients from more than 200 countries all over the world. The Company's partners are the licensed European liquidity providers, banks, payment aggregators and systems with which the company has been cooperating for more than 18 years.
Clients must be at least 18 years old to use the services Riston Capital Ltd.
Freshforex.com is owned by Riston Capital Ltd. The Company uses cookies for better website operation, traffic flow analysis, and personalization. By using this website you agree to our Cookie Policy.
User Data privacy is protected in accordance with GDPR. The SSL certificate installed on the website transfers the information over a secure protocol.
The company's services and information on the site are not intended for citizens and residents of some countries, such as Belgium, China, North Korea, France, Hong Kong, Russian Federation, Spain, Great Britain, USA, and also countries identified by the FATF as high-risk countries or countries with serious AML/CFT deficiencies; countries or regions that are under international sanctions. A complete list is available on the "Countries where the company's services are not provided" page.
Warning: Riston Capital Ltd. does not have representative offices in the Russian Federation and does not register clients from the Russian Federation.
The site contains links to websites of third parties. Riston Capital Ltd. does not check or control the third-party resources that are in any way related to the FreshForex site, so the Company is not responsible for any third-party information or materials posted.
By creating a link to a third party website, Riston Capital Ltd. does not endorse or recommend any products or services offered by the third party.
The website content is intended for informational purposes only. It should not be regarded as an offer or solicitation to any person in any jurisdiction in which such an offer or solicitation is not authorized. It also should not be considered as an offer/solicitation to any person to whom it would be unlawful to make such an offer or solicitation, nor regarded as a recommendation to buy, sell or otherwise deal with any particular currency or any other trading asset investment. If you are not sure about your local trading regulations, please, leave this website immediately.
© 2004—2023 FreshForex – Forex broker
Reproduction of the contents is allowed only with active hyperlink to original source.
Suite 305, Griffith Corporate Centre, Beachmont, P.O. Box 1510, Kingstown, Saint Vincent and the Grenadines.